What our customers say

Have you got a story to share with us? We'd love to hear from you.

'If I didn't have that ROPs fitted, I guarantee I'd be dead now'

NSW cattle producer John Lowe shared this image with MPs and Senators at a meeting about quad bike safety, and explained how an OPD allowed him to walk away uninjured when his quad bike hit a wombat hole and rolled while mustering.

To Whom it may concern.

On the 20th of November (2020) I was involved in an incident on my 570 Can-Am quad bike. I was driving down one of the gravel roads near the farm that I work on. I was hit in the face by a bee and over corrected, the quad bike hit the bank and flipped over top of me. If it weren’t for the Lifeguard that was fitted to my bike, I strongly believe that the outcome of the situation would have been a whole lot different. In my opinion life savers are a very important piece of equipment for all quad bikes. They can save somebody from injury or even from death. I am grateful that my employer made sure that my bike was fitted with a crush protection device.

When a bike comes rolling over, and you know you can’t stop it, there a moment there you think ‘this is it, it’s all over’.. 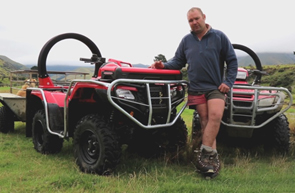 You don’t go out thinking ‘I’m going roll a bike’ no one does, it’s just that accidents happen.

Trying to head off some bulls, my quad flipped and that LifeGuard® went straight down into the middle of my back, and it was like someone putting their hands down on the middle of ya spine, and within another split second the bike was down in the middle of that swamp, rolled straight back onto its wheels and was still sitting there idling.

‘You can train for something to happen, but an accident, you never know how it’s going to be’

Without the LifeGuard®, the bike would have been on top of me..

‘If you were sitting in hospital, with a broken back, you just wouldn’t care what the roll frame cost if you thought that could of prevented it’ 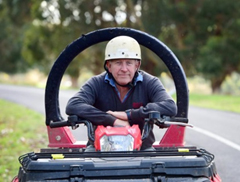 His two ATVs are fitted with the LifeGuard® crush protection devices, which he said were a good investment.

“It’s an insurance policy and if they never get used, it is still a good investment,” Mr McKay said.

He employs staff to help at busy times and said they were now uncomfortable riding ATVs without protection.

Well I have had my first experience rolling a quad bike. I have installed your life saver roll bar for just over 1 month now, I am living in Chile dairy farming here. I had my mother bring over the roll bar at the start of February 2013 which I hear would have been the very first sold. 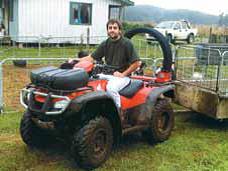 I have a 500 cc Honda quad which I bought last year and have had for around 5 months and it has already done around 4000km, as the farm I own and lease is large we use the quad all day everyday. I never experienced a quad roll on me before and I can surely say if I didn't have this roll bar and how it is formed I would either be dead today or in hospital. What I was doing before it rolled was looking at 11pm at night on my farm for the neighbours horse which had escaped. As part of my farm has an elevation of 140m to 200m above sea level it is dangerous in some parts. I was coming down a narrow stock track which is rough and uneven and steep standing up on the quad travelling around 30km / hour with a spot light in my left hand and my right hand steering. I dodged to the right to miss blackberry which was hanging over the track but only to clip the right front wheel on the bank pulling the steering in my right hand towards me causing the bike quickly to flip down hill to the left, throwing me off in the direction it was about to roll. I rolled off crouching on the ground knowing the bike was coming next, the life guard supported the back end of the bike in the air as it rolled in the pitch black darkness over top of my head and back slightly squashing me underneath. After it rolled over me it landed back on all four wheels still running. No damage to the bike as on the front I have mounted a plastic carry box which saved the handle bars from being bent. As in the past we have mounted the ¨T¨ bar on our quads I feel the bike that night having one of those would have landed on me pinning me to the ground and potentially crushing me under it, especially dangerous at that time of night with no one knowing where you are and living alone. I say thank you for a great product which has allowed me to keep farming and learn from my mistakes without serious consequences.

Guy Scullin walked away from a quad bike rollover without a scratch, a lucky escape he’s attributing to his choice of crush protection 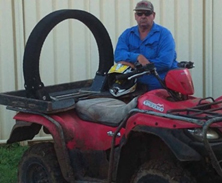 After what he calls "a close call", he started researching roll bars online and came across the ATV Lifeguard, which he installed on both his quads.

"I'm over 50 years of age, I didn't plan to try and get a spot with the Crusty Demons," he joked.

"Without it, honestly I think it would have been potentially a life-changing accident or a life-ending accident."

He had driven up that same gully three times the week before, but this time as he went up the bike flipped backwards.

"The bike went right back over the top of me, but I didn't fall off the bike and I didn't have the weight of it on me," he said.

He said the only reason he could not get out from under the bike was because his Camelbak was caught on the back rack of the bike.

"I'm very grateful that I had it," he said of the Lifeguard.

"I would have thought a complete backflip is probably one of the worst (accidents), you potentially run the risk of breaking your back.

"It could be a fatality, you don't know."

He said apart from those optional roll bars, there was not much protection for quad bike riders.

"I think it's far and away the best risk-reduction device there is."

He said he wanted to get the message out that devices like the ATV Lifeguard existed, and said the risk of death or serious injury outweighed any costs.

"If it was me and I had people I employed that need to ride a quad as part of their work and I knew about this apparatus, you'd have to have it on every machine," he said.

He came searching for the ATV LIFEGUARD stand at the Warrnambool Field Days and was delighted to find the importers on the Murray Goulburn Stand, with a tear in his eye he said “thank you so much for your brilliant product, the ATV LIFEGUARD saved my life” and went about telling his story to how Crush Protection had been the best investment he made.

Hi, my husband purchased his LifeGuard from you earlier in the year (and it literally saved his life when his quad rolled, so thank you, thank you!) and we have since onsold his quad and the ATV LifeGuard. We threw away the installation guide so I was wondering if I could get another copy or a link online to hand on to the new owner? Thank you SO much.

From what I’ve seen, I believe the Lifeguard could help you survive a rollover. It certainly does everything the manufacturer claims it does and has serious engineering behind it.

If you detect a note of caution in my words, there’s a reason. I’ve ridden every kind of quad there is but I’m unqualified to make bold statements vis-a-vis mechanical engineering and its ramifications on ATV safety. All I can tell you is this: I’d rather ride a quad with a Lifeguard than without one.

The ATV Lifeguard is the best invention I have seen to date in the rollbar space. Its flexible design is absolutely ideal for operator safety and the manufacturers promotional videos should sell itself. It doesn’t hinder at all our capabilities with the quad bike.

I hope that we never need it, but am reassured that if I, or any of my staff members do have a mishap, that we have a very cheap life insurance policy. As the saying goes, it’s better to have it and not need it, than not have it, and wish you did, as I’m sure the families of those killed most recently, wish they did.

While we have a specific need for the quad bike, we also saw a need for a side by side and I am very satisfied w the level of safety that it provides our team. We use this vehicle every day, including mustering. I would encourage other producers to invest in a diesel as opposed to a petrol, as while it still maintains some serious power, it lacks take off so “hooning” is not possible. The ROPS comes standard, as do three seatbelts, and we added the canvas doors for weather protection and operator comfort, which are also easily removable.

My challenge to the Board of NSW Farmers, is that they all install a rollbar, or substitute their quad w a side by side, and actively promote the fact that they have done so. This is one particular issue where leading by example will go a long way. That was certainly our intention when we took these steps to improve our on farm safety.

Rebate or not, with a rollover protection system such as this on the market today, it’s not a matter of whether you can afford it, because quite simply, you can’t afford not to.

When the Lifeguard came to the market at the beginning of 2013, I knew I needed one..

As I ride a Quad Bike a lot, for hunting and general recreation, I have had many ‘close shaves’, and knew that one day it could be a bit more than just close shave..

After installing it at the end of January ’13, the Lifeguard has more than paid itself off. I’ve had a number of slow unexpected rollovers on terrain that wasn’t very steep at all, and although the Lifeguard didn’t hit me, it stopped my bike from rolling further, and soaked up the impact, and helped protect the bike – the carrier where it was mounted is still in perfect shape. It didn’t slow me down or make it hard to get off when the bike did roll, which initially I thought it might.

My previous thoughts that a ‘Roll-Bar’ was more dangerous are now gone after using the Lifeguard – it is really a revolutionary piece of kit, and I’m stoked something like this is now available.

A great piece of equipment. My bike tipped over and no injuries.

I'd not venture on to a quad these days unless it had a Lifeguard fitted, it's that vital second, when your control of the vehicle fails, that such devices realise their value. Had a roll-over on farm in the past year where the rider said outright that he wouldn't have survived if not for the ROPS, he was riding slowly (confirmed by the on-board telemetry) and simply got caught out by the conditions.